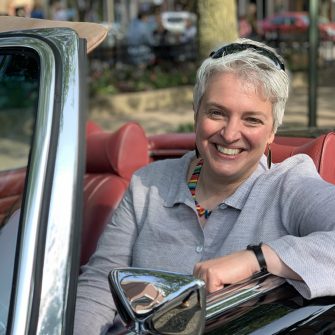 Years in the Field26 Years

Gretchen Gscheidle is an eternal optimist and grounded business realist. For 25+ years, she worked and learned through the inherent tradeoffs of new product development at the global furniture manufacturer synonymous with design and innovation – Herman Miller, Inc. During her time there, she earned increasing responsibility in a variety of research and design roles, all stewarding human-centered innovation to advance the arts of daily living – making people more comfortable, healthy, productive and by removing their aggravations and pain points.

After arriving with a freshly-earned undergraduate degree in Industrial Design, for many years, Gretchen considered Herman Miller her graduate school. Given that since the 1930s, good design has been regarded there as simultaneously good business and a moral obligation – it was a great place to learn and grow.

She did so working alongside design giant (and National Design Award winner) Bill Stumpf, one of her mentors, and many of the company’s other creative collaborators based in New York, London, Berlin, Los Angeles, San Francisco and other locales. Gretchen contributed to the development of Stumpf and Don Chadwick’s iconic Aeron® chair, both the original of 1994 and the “Remastered” version of 2016. Gretchen’s ergonomics research on Aeron and other products has been published in peer-reviewed journals and Herman Miller media. The products that Gretchen helped develop generate about $800 million in annual revenue for the company.

Gretchen’s side-hustles include eight years on the non-profit Office Ergonomics Research Committee, four of them as an officer, two as president. Currently she serves on the MPDD advisory board, is a founding member of the School of the Art Institute of Chicago’s MakeWork program and the lead donor for the William Stumpf Student Research Fund at the University of Illinois at Urbana-Champaign, Stumpf and Gretchen’s undergraduate alma mater.

While her project work has taken Gretchen as far as Launceston, Tasmania, home is the north side of Chicago. On warm summer days, and hopefully lots of cool autumn evenings, you can find Gretchen indulging in her life-long passion – Chicago Cubs’ baseball in the “Friendly Confines” of Wrigley Field.

Years in the Field26 Years