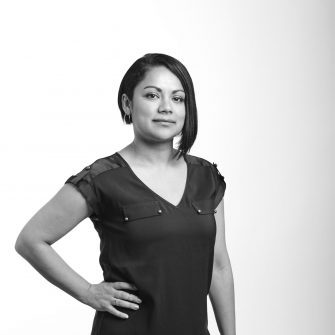 Jessie McGuire is the Managing Director at brand design studio ThoughtMatter, leading a team of artists, writers and strategists to create daring designs and identities for everything from art museums, communities and brands to a range of institutions and organizations. She has been integral in shaping the purpose and creative vision of ThoughtMatter, spearheading projects and campaigns that reflect the agency’s culture and mission, including protest posters for the 2017 Women’s March, a modern redesign of the U.S. Constitution and the recently launched For The People docuseries. Jessie has also worked to raise awareness and support for socially progressive causes such as March for Our Lives, Girls Write Now and The Joyful Heart Foundation as well as on community-minded projects for The New-York Historical Society, Downtown Staten Island and The Center for Arts Education.

Jessie holds a BFA in Communications Design and Advertising Art Direction from Pratt Institute and a MPS in Branding from The School of Visual Arts. Before joining ThoughtMatter, she managed and worked on projects for billion-dollar brands owned by Kimberly-Clark, P&G and Colgate Palmolive. In addition, Jessie formerly served as the Advocacy Chair on the board of directors of the New York chapter of AIGA, and is a regular speaker at conferences across NYC.

When Jessie is not designing, she can be found running in Brooklyn—alone, in a race or after her two kids.