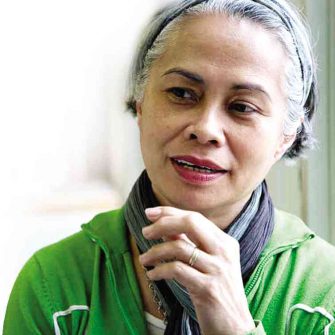 Lucille Tenazas is both an educator and graphic designer. Her studio, Tenazas Design was based in San Francisco for 20 years but relocated to New York in 2006, returning to the city where she originally began her practice in 1982. She is the Henry Wolf Professor in the School of Art, Media and Technology at Parsons The New School for Design where she is developing a graduate concentration in Design, Craft and Technology. Previously, she was the Founding Chair of the MFA program in Design at California College of the Arts in San Francisco.

Lucille’s work has been featured in many publications and exhibitions both nationally and internationally, including a 2003 retrospective of her work from the permanent collection of the San Francisco Museum of Modern Art. Among her clients have been the San Francisco International Airport, Princeton Architectural Press, Rizzoli International, Neue Galerie Museum for German and Austrian Art and projects for numerous non-profit organizations and institutions.From 1996 to 1998, she was the national president of the AIGA and is currently on the board of the AIGA/NY chapter involved in education initiatives. In 2002, she received the National Design Award for Communication Design from the Cooper-Hewitt National Design Museum and has been honored in 1995 as one of the ID Forty, ID Magazine’s selection of America’s leading design innovators.Lucille studied at California College of the Arts and holds an MFA in Design from Cranbrook Academy of Art.