For the month of September, we’ve been focusing our content and conversations around community – the different types that exist, how communities benefit their members, and ways to get involved with or build your own. To wrap it all together, we had a chat with the founder of our very own community, Christina Wodtke.

An established thought leader in Silicon Valley, Christina is a “curious human” with a serious resume. Her past work includes re-design and initial product offerings with LinkedIn, MySpace, Zynga, Yahoo! and others, as well as founding three startups, an online design magazine called Boxes and Arrows, and co-founding the Information Architecture Institute. She is currently a Lecturer at Stanford in the HCI group in the Computer Science department. Christina teaches worldwide on the intersection of human innovation and high-performing teams. She uses the power of story to connect with audiences and readers through speaking and her Amazon category-bestselling books. Christina’s work is personable, insightful, knowledgeable, and engaging.

Take a look at what Christina had to say on why she founded Women Talk Design, her own experiences with community, and what we all can do to create better communities.

WTD: Can you tell me about how you started Women Talk Design and why you were interested in building a community?

Christina: It started as a blog. Every Friday I had a calendar note to myself to add a woman to Women Talk Design. Then one year, two of my students – brilliant women – couldn’t find an internship so I did a GoFundMe hoping to get a job for one of them and I raised enough money for both.

They went out, they did a ton of research talking to speakers and organizers, and that research made it really clear that the list approach wasn’t working. There are a lot of women speakers out there, and yes, it is nice to make it easier for people to find them, but a lot of the problem ended up being around women not having enough comfort in speaking.

Culture tells us don’t speak, don’t stand up, don’t be noisy. We have all this cultural programming going on and then our career tells us to get on stage. Women are in a constant state of cognitive dissonance.

Community creates resiliency. And science shows that women are much better at advocating for someone other than themselves. Our research landed about the same time Danielle was joining and she pushed to start making a community. We knew that cognitive dissonance was holding women back and it became really important to create as much scaffolding and support for the women who might be the only woman in a room and make sure that they don’t suffer from imposter syndrome or feel like a complete outsider.

Danielle came up with the idea of training and communities and included nonbinary people. That’s something that I hadn’t even thought about but it’s very relevant to me…I’ve never fit in any gender box very well.

WTD: What is your experience with communities? Why do you think they’re so important?

Christina: I believe community creates resiliency because I’ve seen it so much in the past. And community makes you smarter. I think it’s the guy who invented Linux said, “With enough eyes, all bugs are shallow bugs.” And I’ve found that to be true – if you get enough people’s eyes on a problem, they can collectively solve it and that’s amazing.

Throughout my entire career, I’m always building communities. I built The Cocktail Hour way back in ‘99 because everybody who was doing information architecture was in a consultancy. And so everybody was like, “That’s our secret sauce.” Nobody would share their techniques and practices, which seems weird now since we have 100 books and magazines on it. I started The Cocktail Hour as a subversive event to get people to share their knowledge.

You also get accountability with community. A lot of what Women Talk Design does is it creates accountability because you make a promise to go apply for this talk or whatnot. That’s really powerful.

And on top of that, when you have a bad day or you have a hard time or something goes sideways, you have someone to talk to. Community just does so much to support you no matter what you’re trying to do.

WTD: What are some of the effects you’ve seen communities have?

Christina: If you’re part of a Community, you’re more likely to take chances, because you know somebody can catch you. You know if it goes totally sideways, at least you can go have drinks with friends or hop on the forum and say, “Can you believe this?” So you’ve got a little more courage. And you have the advice.

A lot of folks who have privilege think it’s not a big deal to say, “I don’t know this, is there an answer?” When I was at LinkedIn, they had this thing called LinkedIn Answers but nobody would use it. It turned out it was because you’re in a work network and the things that you post will be shown to everybody in your network. That meant that if you said, “Does anybody know how to do a customer journey?” you were scared it would show up on your boss’s feed and they’d think, “Well, I hired her because she can do customer journeys, what the hell?”

One of the things that Danielle and I considered when we were designing the very first workshops was how to create psychological safety in these spaces. We’ve worked to create a safe space where you can say, “Actually, I have no idea what you mean by the word hook.” or “Why do I need a hook for my talk? What does that even mean?” And that makes a big difference.

Creating psychological safety means that people can take risks and know that somebody has their back and they’re brave enough to say, “I don’t know this.”

WTD: What can communities do to create a safe space for members?

Christina: Whatever your rules are, you should say them out loud. Sometimes they’ll say, “This is a safe space,” but nobody will really believe it until it’s tested so it’s really important when you create a community to not only create those rules but create a little script for when they get violated. Almost nobody wants to be the person who says, “Hey, your language was really damaging, and if it happens again we’re going to have to ban you.” Nobody wants to have that conversation but you can’t set rules unless you’re willing to take on the consequences. The one time it happens that somebody is out of line and nobody does anything about it, that psychological safety is gone and you’re not getting it back. People trust what you do over what you say.

WTD: Where do you find communities? What do you look for and what are some red flags?

Christina: Google is pretty good. And I think a lot of people haven’t heard of Meetup which is weird to me. You can look for events, you can attend them and you can talk to people and ask questions. A lot of those meetups are online now so even if you were only thinking of moving to New York or something, you can attend a meetup digitally.

Look for communities of practice. If you type in something you’re passionate about then you can add the word “forum” or “community” and try a couple different words to see if some bulletin board comes up. You could try slack – a lot of people have hacked slack.

The only downside is sometimes they can be very transactional. And sometimes there is a certain toxic masculinity if you look at the language – a lot of talk about “killing it” or “crushing it” – and you see a lot of names are guy names. Then I think, “They’re not going to be very welcoming to me here.” If any community is doing those things, they should realize they’re sending a message that women aren’t allowed. The other weird sign is, “We’re like a family.” I always get a little creeped out when I hear that.

WTD: What advice do you have for people looking to get started with a new community or engage more?

Christina: If you overthink it you won’t participate and it’s really important to participate and say something – put yourself out there. Then, when you write something, try to be kind. And if you make a mistake, immediately apologize and own it.

Sometimes you’ll say something and it will go wrong…we’re all humans. if somebody said something that’s stupid and they’ve apologized for it, then say thank you or glad you’ve apologized and let’s move on. To be supportive, one simple thing is to backchannel that person. If you see somebody make a mistake, you can backchannel them to say, “Hey, this is how it’s reading.” That gives that person a chance to fix it themselves, and then, if they don’t fix it, you can have a different kind of conversation.

Christina finished with some final thoughts on community:

Go find your community. They’re out there and they’re waiting for you.

And if you feel like you should speak, or you dream of speaking, Women Talk Design is such a good community. There’s so much knowledge there. And who knows – one video might go viral and it might lead to amazing things. It’s worth putting yourself in the world. 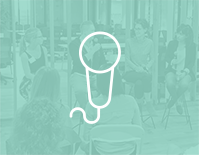 3 Things We Learned from the Designing Your Talk Workshop

Getting Started in Public Speaking

A formula for speaking fees 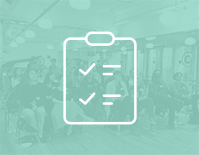 Conference Organizers Can (and Should) Help Move the Needle on Diversity

Holding Conferences Accountable: Questions Everyone Should Be Asking

Organizers, here’s what is missing from your Call for Proposals

Take Your Idea From Brain To Book

Train up speakers at your company Prepare high potential employees to speak about their work on behalf of your company at conferences and public events. Our workshops equip new speakers with the tools and confidence to propose, craft and deliver compelling public talks. Contact us to learn more →

Connect with a Community of Speakers