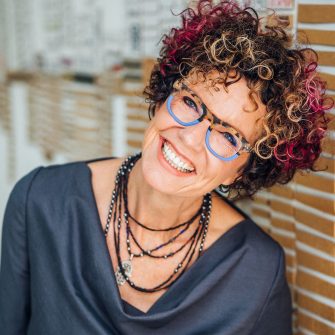 Laurie Frick is a data artist exploring the bumpy future of data captured about us. We’re more than halfway thru the decade when humans shift from mysterious beings – to big data algorithms, where everything about us will be known. Rather than worry, Frick envisions a time when personal data is a peek into our unique identity and just possibly a glimpse into our future.

Will it backfire? Our movements, choices, friends – even the food we ingest will be anticipated. How will it feel when self-delusion becomes impossible? Using her background in high-technology Frick creates hand-built work and installations, anticipating the day when patterns of behavior become patterned artworks and the mass of data will predict our lives.

She holds an MFA from the New York Studio School, an MBA from the University of Southern California and studied at New York University’s ITP program. Frick recently was awarded residencies by Samsung Research and the Neuroscience Research Center University of Texas. Frick’s talks and publications include The Atlantic, Los Angeles Times, Wired, NPR, Google, Creative Mornings and TEDx. She has exhibited widely with shows in Los Angeles, New York and Texas, and has installations in numerous cities, including Los Angeles, San Francisco, Tyson’s Corner, College Station, Houston and Austin.