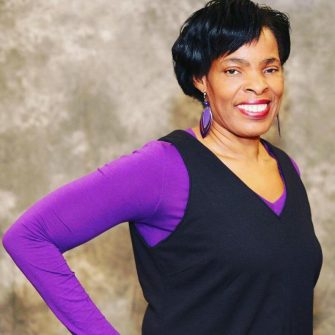 Vickie L. Evans is a woman that wears many “hats” representing her diversified gifts and talents.

Vickie is a sought after national public speaker who recently delivered the keynote address for “Black Girls Rock”, an award ceremony to recognize Women of Color who are making a positive impact in their communities and the lives of others.

Recognized as the 2018 Nonprofit Executive of the Year by ACHI Women Supporting Women, Vickie has showcased her talents of writing to include producing/directing award-winning stage plays and bestselling empowerment books coupled with her passion for humanitarian/social justice issues such as domestic violence, and human equality/benevolence and incorporated into an empire entitled Performing Arts and Literary Society (PALS), in which she holds the title of Chief Executive Officer.  PALS is a nonprofit organization that advocates for social justice and personal empowerment using “The Arts” as a visualization tool to invoke change. Their motto is “We Convey…What Others Would Like To Say…Using A Stage Play!”   She was also featured in the sixth edition of The Who’s Who In Black Charlotte, as a Corporate Brass.

Vickie is also amongst the top fifteen multicultural women in Charlotte to be honored and receive the Walker’s Legacy Power15 award.  Walker’s Legacy is a national organization based in Washington, DC who is a global platform for professional and entrepreneurial multicultural women.  She is honored to be in the first class of women honorees here in Charlotte which included top professionals as the commissioner of the Central Intercollegiate Athletic Association.

Vickie is the best-selling author of the newly re-released personal empowerment memoir, “Know Your Worth (Overcoming The Dragon of Low Self-Esteem)”.  This empowering memoir ranked 5th in Emotions, 7th in Gender Studies, and 7th in Women Studies on the Amazon.com Bestsellers List.  Know Your Worth is her personal discovery of characteristics and personality traits that tend to “drag” out the positive energy and hinder the upward mobility and growth of those chosen for GREATNESS.  She has also written two other books, an e-book – How To Produce An Award-Winning Play, The Nonconventional Way, and her first self-empowering memoir, The Art of Forgiving.  All of Vickie’s books are birth out of her own life struggles, lessons-learned, and pearls of wisdom gleaned from her personal and professional journeys.

Ms. Evans is a multi-award winning self-producer, playwright and director who has extensively toured throughout the United States and Washington, D.C. with her stellar cast members of the award-winning domestic violence awareness stage play, “A Change Is Gonna Come”, which highlights domestic violence in the form of spiritual abuse.    Among many other awards, “Change” was the recipient of the 2016 Broadway World Charlotte Regional Awards for Best Play, Best Director, Best Actor and Actress for her cast members.  Her musical on homelessness, The Gift, was also the recipient of the 2014 Broadway World Charlotte Regional Award for the same categories mentioned above.

In 2017, Vickie was selected as a board member for the North Carolina Coalition Against Domestic Violence.  Vickie is an avid and outspoken advocate in the campaign to end domestic violence.  As a child-witness, she has first-hand knowledge about the effects that domestic violence had on her development into a young woman and how it affected her self-esteem.  Vickie and her mother fled like fugitives in the night from her childhood home in Sugarland, Texas, after her Dad fired a bullet at her mother that nearly grazed Vickie’s face.  A few days later, they boarded an airplane to Tacoma, Washington, prior to her senior year in high school, and never looked back. She has developed a campaign entitled, Don’t Take Away My Innocence as a support mechanism for adult recovery and for intervention for children who are currently witnesses.  Vickie has begun filming a documentary about children who parents were murdered due to domestic violence entitled, “Left Behind:  Remembering The Times”, which she plans to finalize and release by the end of 2018.

Vickie advocates persistently to make a difference in her community, with a passion for young ladies and mature women who have experienced love, relationship, victimization and self-image issues. She is a board member of the Metrolina Theatre Association.  She is the co-chair of the Interfaith Subcommittee for the Domestic Violence Advocacy Committee and is a member/speaker of the Charlotte/Mecklenburg County’s Domestic Violence Speakers’ Bureau.  Vickie is an active member of ACHI WSW (Women Supporting Women).  Ms. Evans was honored with the “Voices of Women” award by Delta Sigma Theta Sorority for her community advocacy and oratorical contributions.  Vickie is an ordained minister at Reconciling The World Ministries, and has been in ministry for thirty-four years.