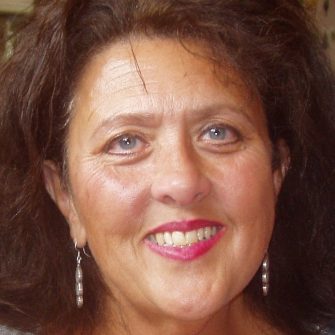 Jenny’s career has been the culmination of several instinctive paths in her life which have led her to enjoying being an author and now a public speaker.  With almost thirty trips to India over the past thirty years, she has explored and uncovered the history of her ancestors and their interesting path.

The re-uniting for Jenny of a family heirloom of a book which her great x 4 grandmother started in 1844, Madras which she remembers seeing in her mother’s pantry, is a time capsule in itself.  This cherished book holds not only the handwritten manuscripts of recipes which were passed down from mother to daughter for the next five generations, but also hints at the technological changes ushered in by the industrial revolution which had a positive effect of intertwining the economies of India and Great Britain.

With her passions for cooking, India, research and writing, Jenny’s award-winning cookbook “A Grandmother’s Legacy” has been a labour of love – a memoir that mingles the history of her family when they lived in India, with her grandmothers’ recipes that were prudently passed down through the generations.

Recently interviewed by Jenni Murray on BBC’s Woman’s Hour, Jenny has also been featured in “The Lady” magazine, “Who do you think you are?” magazine as well as “Waitrose Magazine” and “Sainsbury’s Magazine”.  Jenny has been able to impart knowledge of her family’s cuisine through her teaching at notable cookery schools, including the renowned WI headquarters, Denman College in Oxford.

Jenny’s past career has also influenced her with her continuing interest in both research and travel from her early days in television production at the BBC where she picked up skills in how to present but also carved out a career there in researching.  The following decade of the 1980s found her working in high tech as a Corporate Travel Buyer for twenty years and with her engaging personality and knowledge was able to easily connect with her market and secure global airline contracts to the benefit of her company.

A GRANDMOTHER’S LEGACY by Jenny Mallin is a book out of the blue.

Here comes a delight of a book that effortlessly throws light on the life and times of Anglo-Indians during the prime days of the Raj. Spanning the 19th and the 20th centuries, the story covers the lives of five generations of women of a family, beginning with Jenny’s great-great-great grandma Wilhelmina down to her mother Cynthia who immigrated to Britain in 1952.

The narrative revolves around Wilhelmina’s handwritten recipe book containing recipes of over 500 dishes, chiefly Anglo-Indian, which has been handed down and added to from generation to generation.   Thus, one is charmed to find classic nuggets of Anglo-Indian life, narrated not impersonally as by a student of community history, but from the first-hand experience of members of one big family.

So, we have notes on the Railways, the cellular jail in the Andamans, the ‘Indian’ expedition to Mesopotamia during World War I, the Victorian style of dressing in the 19th century, tales of hunting trips, the Orr and Barton studio and Eventide Homes in Bangalore, the marriage between cousins (Shandleys), Poona’s military station, boxing bouts against soldiers, the long walk back from Burma during World War II, wall-posters and Christmas cards in the 1940s, and much more.

Jenny Mallin has every reason to call her book a memoir instead of a cookbook, though fans of cooking will also find it a truly a treasure trove.